Today, my administration is launching the most sweeping action in history to lower the price of prescription drugs for the American people.

Health care is arguably the top domestic policy issue and of major concern to most Americans. Coverage, access, and, most importantly, affordability are not abstract political concepts discussed in elite coffeehouse circles but rather are real-world problems that people struggle with daily. Do I need to see a physician for this problem? What impact will a diagnosis have on my life? Can I afford the medication?

What the White House Is Doing About It

A recent public opinion poll found that 86% of Americans believe that the cost of prescription drugs is one of the most important policy issues that the federal government address. President Trump’s campaign platform made healthcare reform a major plank, and in May 2018 he gave a Rose Garden speech at the White House saying that “the American people deserve a healthcare system that takes care of them—not one that taxes and takes advantage of our patients and our consumers and our citizens.”

What Government Agencies Are Doing About It

Echoing the president’s sentiment, Health and Human Services (HHS) Secretary Alex Azar said that although the United States leads the global effort in science and research, “too often, this system has not put American patients first. We have access to the greatest medicines in the world, but access is meaningless without affordability.”

To reverse the increasing trend in costs to patients, the Administration proposed four strategies to directly combat the impact to consumers:

HHS is soliciting public comments in these and other areas as the blueprint is rolled out. Other concerns that the blueprint addresses include correcting regulatory process duplications and errors, revisiting generic pharmaceutical pricing, reviewing value-based purchasing mechanisms, and interpreting drug data and cost evaluation.

Additionally, greater emphasis has been placed on transforming Medicare Parts B and D. Part D is the prescription drug benefit program, and the blueprint suggests that new and better tools in negotiating the pricing would have a direct benefit to consumers. When Medicare Part D was enacted in 2003, its expansion of coverage was considered a big political lift to change the way American patients and their drug treatment plans were paid for. Today, polling indicates that most Americans insist on the program as a way to afford their medications.

In a speech following the blueprint announcement, Azar acknowledged that reform will not be an easy task but that “the complexity of the problem is no excuse for inaction or incrementalism. There are plenty of actions we can and will take administratively to shake up this system. We do want to hear from industry, patients, and other stakeholders about what they think of the full range of changes we put out in our blueprint.”

The Herculean effort, with public input, will take some time to fully develop. ONS, like other provider associations and patient advocacy groups, is reviewing the proposal and weighing in on how best to improve the system for patients with cancer, focusing on patient-centered care. Stating firmly, ONS asserted that “lack of insurance or inadequate healthcare coverage adversely affects health and cancer care on multiple levels.” As the discussion continues, and policy alternatives are suggested, ONS will remind decision makers that access and affordability are key elements to any real reform. 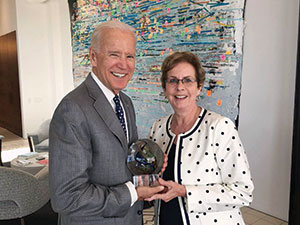 During a meeting at the Biden Cancer Initiative in June 2018, ONS Immediate Past President Susan M. Schneider, PhD, RN, AOCN®, FAAN, presented former Vice President Joe Biden (both pictured at left) and Dr. Jill Biden (not pictured) with honorary ONS memberships to thank them for their work in cancer research and care.

For more information about the Bidens’ work, visit the Biden Cancer Initiative website.