Longtime ONS member Scarlott Mueller, RN, MPH, has been appointed as the new chair of the American Cancer Society (ACS) Board of Directors for 2016. In the past, she served as president-elect for the ONS Foundation and is a current and active ONS member. 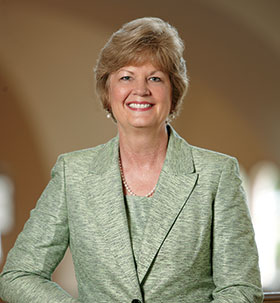 “It is an honor and a privilege to be the 2016 chair of the ACS Board of Directors,” Mueller says. “Throughout my nursing career, two organizations have had the most profound impact on my professional and personal development: ONS (and its affiliates) and ACS. Both are tremendous assets to oncology professionals and cancer survivors. I have not only learned a plethora of knowledge and skills in oncology and leadership but have met many lifelong friends and colleagues, whom I greatly admire.”

Because of the nature of their work, Mueller explains that oncology nurses have many skills that make them effective volunteers for organizations such as ONS and ACS. “I would encourage all of my colleagues to be inspired and to inspire others to share their many talents by giving back. There is much work to be done in our fight against cancer, and oncology nurses are, and should continue, leading the way. I hope that in 2016 we can engage more volunteers, partner in community settings in more impactful ways, and feel empowered to move the missions of ONS and ACS forward together, like never before.”

Mueller has volunteered with ACS for more than 35 years, serving the past 5 on the board of directors. She recently retired as vice president and chief nursing officer at North Florida Regional Medical Center in Gainesville. Mueller also served on the ACS Florida Division Board for 19 years, including her presidency from 2004–2005. She is the 2010 ACS St. George National Award recipient, as well as the recipient of the 2013 Florida Division Distinguished Service Award.

The 2016 ACS Board of Directors is as follows.